Halstead Choral did it again and turned Covid disaster into triumph.

A major Mass performance was replaced by a concert which followed a come and sing rehearsal in a beautifully warm St Andrew's church.

The early dynamics of Vivaldi's Gloria led to the crescendo in Panis Angelicus and a delightfully strengthened vocal line.

The sustained last note of Faure's Cantique was followed by a Zadok the Priest that achieved a final crisp staccato.

The pin drop moment of Mozart's Ave Verum preceded the brilliantly chosen Hallelujah finale from Handel's Messiah in which the top sopranos met their challenge with consummate ease.

Outstanding organist Nigel Brown made a magnificent contribution to this event's success, accompanying everything with tremendous skill.

I dashed out at the end, holding back the tears at what Halstead Choral had achieved.
​
The effect of live music cannot be overestimated. Well done!

Pat Rudkin's "Curtain Call", Halstead Gazette April 21st 2022
​We are back to face-to-face rehearsals at the United Reform Church, Halstead from 7.30pm to 9.00pm with a short break – please bring your own drink / snack

We are continually reviewing how we might keep everyone safe, currently mask wearing is optional as is social distancing.

From January we have been working on Brahm's Requiem. Our first run through of "How lovely are thy dwellings" was very successfully led by our concert accompanist Nigel Brown just prior to our Christmas break. However, we have made the decision to put concert on hold until the Autumn term and instead we invite you to join us for an afternoon of Classical favourites. See details by clicking on the "Concerts and Events" button below.

​
If you would like to join us, it is free to “try” then £110 for the whole year or £35 for the remaining  term (instalments can be arranged)

Our most recent productions

Katherine Mina Courtauld blue plaque unveiling
Halstead Choral was pleased to be invited to sing at the official unveiling of a blue plaque, commemorating the life of Katherine Mina Courtauld. As a committed believer in women's rights, Ms Courtauld supported the suffragists movement and as a farmer of the 243 acre Knights Farm in Colne Engaine she provided training for women, leading the recruitment into what became the Women's Land Army. The Blue Plaque can be viewed on the outside of the "Courtauld Memorial Hall" in Colne Engaine.

The choir, led by James Davey (jamesdavey.org) consequently sang the "Land Army Song" otherwise known as​ "Back to the Land" (words by Adkins and Moncrief and music by Loring).

The arrangement included an additional tenor part written by Sue Bennett, an alto in the choir. 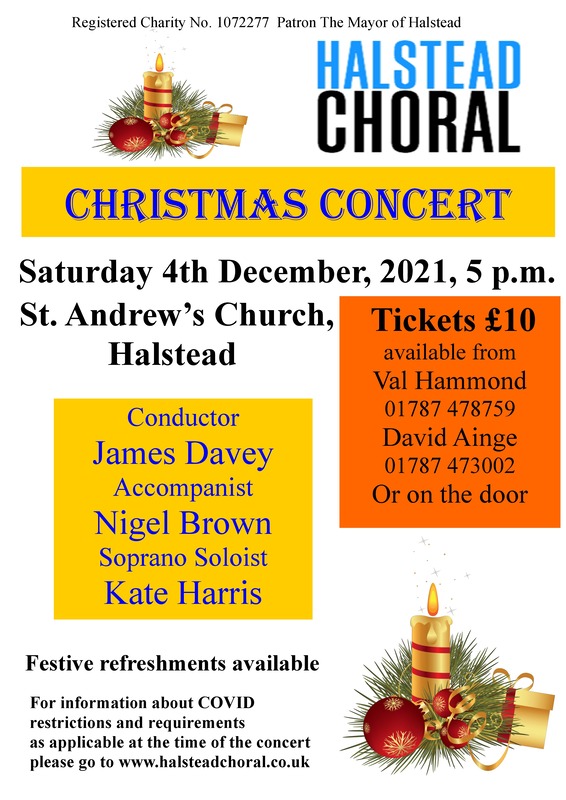 Halstead Choral members turned into masked singers in their Christmas concert in St Andrew's church, Halstead. The masking did not affect the delicate part arrangements they were able to project, especially in Myn Lyking.

A beautifully arranged programme including a surprisingly sombre Bob Chilcott number and my favourite Berlioz's The Shepherd's Farewell.

The latter preceded the choir serving interval refreshments to their seated audience.

​Is there nothing that this wonderful local group won't do to keep music alive?